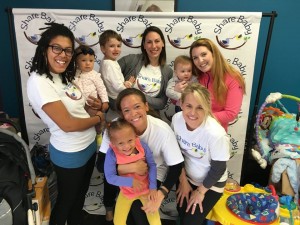 Diapers. They are a need that we often don’t think about. However, they can be a significant expense for low-income families. Many families simply can’t afford them. Babies of these families are sometimes left for days in soiled diapers resulting in fecal impaction, infections of the urinary tract as well as skin diseases.

The lack of fresh diapers also has an impact on the mothers. “Sometimes I can’t make it through the month before the diapers run out,” says Tabatha Pettigrew, a 32 year old mother of three children aged 1, 2 and 10. “It can be so embarrassing.” High levels of stress as well as depression in parents have been associated with mental problems in children and poor performance in school.

Kristin Finkelstein, Kate Mumaw and Maya Ammons, all mothers of young children, understand just how hard it can be to raise young children. Aware of the struggle that poor Baltimore families face to feed, diaper and clothe their babies, the friends were inspired to start ShareBaby.

The organization collects items from donors to redistribute to poor families in the Baltimore area and throughout Maryland. “We started by asking our friends and families to drop things off that they didn’t use anymore,” recalls Finkelstein. “They told their friends and families and it grew from there.”

ShareBaby took off even further after Eliseba Osore and Kate Bryden approached its leaders with the idea to start a diaper bank for Baltimore dubbed, diaperSHARE.

Kate Bryden, who owns a construction management company, had been looking for a way to help women in Baltimore that couldn’t afford diapers. “I had searched online for diaper banks in the area and found none,” she says.

She was inspired by an appeal from a desperate mother on a private Facebook group for mothers. “The woman told the group how she didn’t have enough money for diapers. She didn’t know what to do. She wrote ‘Pray for me’. I couldn’t get that message out of my head.”

diaperSHARE now provides fresh diapers to desperate families in Baltimore. Families like that of Pettigrew receive 25 diapers per month. This would have cost them $1 each in a convenience store. This is quite expensive for households living on less than $100 a month.

“It’s important to help moms in caring for the next generation,” says Bryden. “These children are the future. They can grow up to be productive in the society. We hope we can contribute to breaking the vicious cycle of poverty.”

For experienced dentist Dr. Jarrod Cornehl, the opportunity to give back is one … END_OF_DOCUMENT_TOKEN_TO_BE_REPLACED

One in every 600 children in Guatemala is born with a cleft palate. Many of … END_OF_DOCUMENT_TOKEN_TO_BE_REPLACED