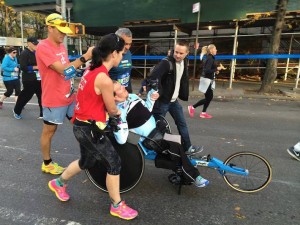 Anyone who’s completed the Iron Man knows just how brutal the triathlon is. Facing the New York City Marathon after completing the Iron Man would be a challenge but probably easier to manage. At least that’s what Kyle and Brent thought.

Kyle and Brent Pease aren’t your regular racing enthusiasts. They are brothers who have raced together in several events over the past few years. Kyle suffers from cerebral palsy. But that hasn’t stopped the pair. They’ve even completed two 140-mile ironman events together.

The brothers, who were born and raised in Atlanta, Georgia, are determined to create awareness and raise funds to support people living with disabilities. They established the Kyle Pease Foundation as a way to use sports to help people with disabilities meet their personal needs.

A Test of Fire

Having completed two Iron Man events, the brothers felt adequately prepared to complete the New York City Marathon on November 1st. The first 12 miles were uneventful and they were set to complete the race within their targeted time. However, at the 12th mile mark, one of the wheels on Kyle’s wheelchair broke.

Without a spare wheel, any other duo would have given up the race. But that’s not Kyle and Brent. “Our coach has a quote on his door,” says Brent. “It says ‘I was determined to find a way to keep our journey going at any cost.’” And that’s just what the brothers did.

When the wheel broke, Brent carried Kyle for about half a mile. They then stopped to figure out another plan. NYPD came to their rescue and escorted them to the nearest bike shop. However, they couldn’t find a replacement for the wheel.

They then resorted to tying the chair to Brent’s shoulder. This worked, but it was difficult to steer the chair as it would lean on one side more than the other.

Then Amy, a fellow runner, came up alongside the brothers and steadied the chair for Brent so that he could push it forward. They hadn’t gone far before another runner, Cameron, came up on the other side to stabilize the chair.

Finish Your Race at All Costs

The brothers completed the race in 7:25:31 with the help of the two runners Cameron and Amy. “It was slower than we would have liked, but we completed it anyway,” says Brent. “People say that Kyle borrows my legs, but I borrow his spirit.”

For experienced dentist Dr. Jarrod Cornehl, the opportunity to give back is one … END_OF_DOCUMENT_TOKEN_TO_BE_REPLACED

One in every 600 children in Guatemala is born with a cleft palate. Many of … END_OF_DOCUMENT_TOKEN_TO_BE_REPLACED