Here’s a story which had us jumping for joy. A team of U.K. scientists and zoologists have successfully captive-bred the Lake Oku clawed frog. With their natural habitat in danger, successful captive breeding means this weird little frog is no longer at risk for extinction

We use the phrase “weird little frog” with love. The Lake Oku clawed frog is “one of the most genetically unusual creatures in the world,” said Carly Waterman in a recent interview with The Guardian. Waterman is the Programme Manager for the Zoological Society of London’s EDGE group.

What makes this frog so unique? First, unlike most frogs, this one has no tongue. However, what it lacks in tongues it more than makes up for with chromosomes. Most animals, including humans, have two sets of chromosomes. The Lake Oku Clawed Frog has twelves sets.

Why so many? Because the frog is part of an ancient type of amphibians known as pipids. There are only 30 pipids on the planet today. They all live in water and they all have no tongues. Pipids, including our Lake Oku friend, have been on the planet for about 130 million years. 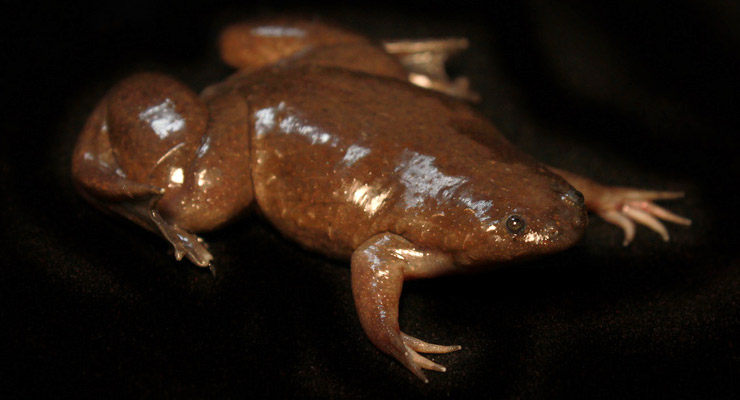 Today, this special frog lives naturally in just one place: Within the rainforests of Cameroon, on the top of Mount Oku, in a lake. Unfortunately, this means the entire species could be wiped out if something happens to that lake. This could be disease, pollution, the introduction of a frog-loving fish or something else entirely.

In order to create a suitable captive environment, first the animal’s natural environment needs to be extensively studied. In 2008, this job fell to then-student Thomas Doherty-Bone, funded by a grant from the Royal Zoological Society of Scotland. He traveled to Cameroon and began to study the frogs in their natural habitat.

Studying the frogs was only part of the challenge. Doherty-Bone had to convince the locals as to why taking a few frogs to the U.K. was a great idea. Then, he had to navigate customs around the globe. Traveling with a frog is difficult enough. We can only imagine the rainforest of red tape involved when traveling with one of the rarest frogs on the planet.

But the hard work paid off. Earlier this month, the London Zoo became the first zoo in the world to successfully breed an Oku clawed frog. In order to do so, they had to mimic the frogs’ natural habitat exactly. This involved replicating water parameters, seasonal temperatures and the pH profile of the lake.

The frogs took six years to adapt to their new home and reproduce. When they finally did, the scientists were pretty surprised. The tadpoles are pretty weird looking, even by frog standards. Their skin is transparent, so their guts, gills and brain are all visible. After about six months, they change into the adults.

Ben Tapley is the Team Leader of Herpetology at the London Zoo. He told The Guardian that “it was a total career highlight seeing the frogs lay their eggs and watching the tadpoles develop and knowing that no one else had seen the process before.”

While obviously the frogs should be able to thrive in their natural environment, we’re happy to see that a back-up plan is in place. So we salute the heroes at the London Zoo, the Zoological Society of London, the Royal Zoological Society of Scotland, Ben Tapley, Thomas Doherty-Bone and everyone else who helped save the Lake Oku clawed frog.

We’d also like to salute the frogs themselves. Their determination to survive and thrive has kept them on the planet for hundreds of millions of years, and we’re glad to know they’ll be around for the foreseeable future, too.

For experienced dentist Dr. Jarrod Cornehl, the opportunity to give back is one … END_OF_DOCUMENT_TOKEN_TO_BE_REPLACED

One in every 600 children in Guatemala is born with a cleft palate. Many of … END_OF_DOCUMENT_TOKEN_TO_BE_REPLACED