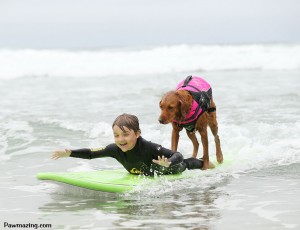 We are often so focused on what we think life ought to be, or who we think we ought to become, that we miss out on the special gifts that we already possess. However, as Ricochet’s life proves, much more can be achieved by accepting who we are and using our unique abilities to help others.

Judy Fridono had high expectations for Ricochet from the day she was born. The golden retriever was born into the Puppy Prodigies Neo-natal and Early Learning Program. She began her training as a service dog from day one.

Ricochet progressed through her training fast, learning how to undo zippers, turn on lights and other household tasks. She was a prodigy. There was only one problem: she loved to chase birds. This could prove dangerous, especially for a person with a disability.

Fridono was faced with the choice to give up or force Ricochet to conform to whom she wanted her to be. She chose neither. “I decided to nurture her natural tendencies,” she says. Taking advantage of Ricochet’s energetic and playful nature, Fridono taught her how to surf.

Ricochet’s first charity surfing appearance was in August 2009. She was to surf alongside Patrick Ivison, a 14 year old paraplegic, with the aim of raising money to pay for his therapy. Ivison had been confined to his chair since he was 14 months old following a car accident that resulted in a spinal cord injury.

The two surfers started out on separate boards. However, as they continued to ride the waves, Ricochet jumped off her board and onto Ivison’s. She would shift her weight to balance it, making his ride smoother. And when he would fall off the board, she would be right by his side.

One of a Kind

Although Ricochet’s surfing skills are admirable, her natural ability to make an instant, heart-to-heart connection with anyone she comes into contact with is remarkable.

Ricochet acts intuitively and empathically to the physical and emotional challenges of those she interacts with, thus giving them a healing paw. It was the birth of a new way to offer a healing hand to those with disabilities.

Ricochet continues to help others find balance in their lives. She’s surfed with autistic children to give them their confidence back. She’s helped children with special needs connect with the world where they couldn’t. She’s been the balance for those who thought they couldn’t surf because they didn’t have arms. She’s raised over $400,000 for special needs therapy and other charitable causes.

Ricochet will touch many lives and inspire even more all because her owner, Fridono, allowed her to be who she truly was.

For experienced dentist Dr. Jarrod Cornehl, the opportunity to give back is one … END_OF_DOCUMENT_TOKEN_TO_BE_REPLACED

One in every 600 children in Guatemala is born with a cleft palate. Many of … END_OF_DOCUMENT_TOKEN_TO_BE_REPLACED