Faith, a dog born on December 24th 2002, was doomed from the beginning. She was born a bipedal. Only her hind legs were fully developed and her two front legs were severely deformed. As it is in the wild, the weak are doomed, and Faith’s mother believed this. 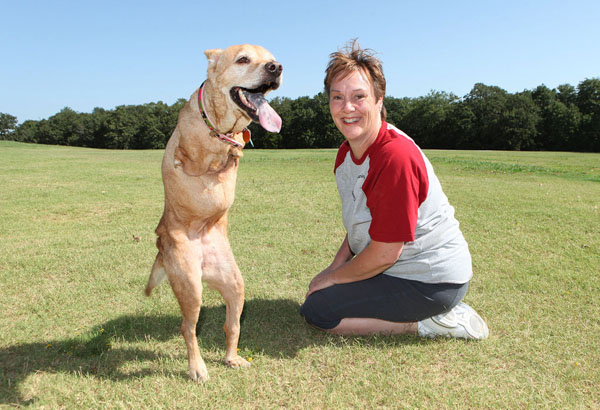 Unlike the rest of the pup litter, she couldn’t suckle because of her deformities and her mother tried to smother her, as many animals do to the young that are considered weak. Luckily for faith, she would be rescued by Jude Stringfellow’s son, Duncan. This would be the beginning of one of the most incredible journeys any dog could imagine.

When Faith was brought to Jude Stringfellow by her son, she was only 3 weeks old. Naturally, she couldn’t walk as her front legs were severely deformed. All she could do was drag her body across the floor when she wanted to move from one place to another. When Stringfellow took her to the veterinarian, she was advised to euthanize the puppy. She was told the dragging would result in friction which would result to a hole in the puppy’s stomach and chin.

Stringfellow, however, wouldn’t consider euthanizing the puppy. “She looked up at us and it was as if she was saying that we were her only hope,” says Stringfellow. “Without us she would surely die.” So Stringfellow did the only logical thing; she taught Faith how to walk.

Using a teaspoon of peanut butter, Stringfellow coaxed the puppy to walk on her hind legs. The family corgi was also of great help. She would bark at Faith from the other room and sometimes nip on her heels urging her to walk.

Faith eventually learned to hop, walk and run, becoming one of the most inspiring animals in the country. She showed people that animals too could adapt to and overcome their circumstances when people take the time to care for them. Faith and her family became an inspiration to those who needed a reminder to keep the faith and keep trying.

Faith wasn’t just an inspiration to those who are going through adversity, but also to many children with whom she worked as a therapy dog. Mexican children learning English would read to her to help them build their confidence.

Sadly, Faith passed away on September 23, 2014. However, her story continues to inspire millions around the world to overcome their circumstances.

For experienced dentist Dr. Jarrod Cornehl, the opportunity to give back is one … END_OF_DOCUMENT_TOKEN_TO_BE_REPLACED

One in every 600 children in Guatemala is born with a cleft palate. Many of … END_OF_DOCUMENT_TOKEN_TO_BE_REPLACED