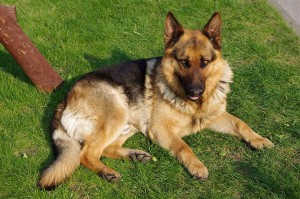 The term man’s best friend takes on a whole new meaning when it comes to Frankie. The German Shepherd-mix was part of a study at the University of Arkansas for Medical Sciences (UAMS) in which he managed to identify samples of urine from patients that were later diagnosed with Thyroid cancer.

All in a whiff

Using dogs in cancer diagnosis and treatment was once thought of as impractical. However, a discovery of the type of chemicals that our canine friends can smell has led to the development of new tests. One such test involves the training of canines to sniff out volatile organic compounds that are produced by cancerous cells.

The thyroid is an important organ in the body. Its function is to produce hormones that are vital for the regulation of the body’s metabolism. Modern diagnostic methods for the detection of thyroid tumors involve testing blood hormone levels as well as extracting cells from the thyroid gland for testing.

It is now common knowledge that cancerous cells are defective. They grow out of control. This abnormal characteristic is one way of identifying these cells.

It was recently discovered that these cells also have a unique chemistry that differentiates them from normal cells. They produce volatile organic compounds which are released into the body. These chemical compounds can be sniffed out by trained dogs. This is because man’s best friend’s receptors are 10 times as many as that in humans.

Frankie is a male German shepherd of mixed breeds. He was a rescued dog that was trained to specifically recognize cancer affecting the thyroid gland. He was the first dog trained in the UAMS study and gave promising results from his training. Out of 34 samples, Frankie was able to correctly sniff out the organic chemicals in 30.

Although there are many skeptics to the use of dogs in the diagnosis of cancers, Dr Bodenner, the study’s principal investigator, is optimistic. “We are heading to a time when canines that are scent-trained will be helping physicians in the detection of cancers in their early stages,” says Bodenner. “We’ll be able to avoid unnecessary surgeries as a result.”

Although Frankie is not being used in the formal diagnosis of cancers outside the UAMS study, he has inspired the college to expand its scent-training program and enabled further research into training more canines in what could be a lifesaving test.

For experienced dentist Dr. Jarrod Cornehl, the opportunity to give back is one … END_OF_DOCUMENT_TOKEN_TO_BE_REPLACED

One in every 600 children in Guatemala is born with a cleft palate. Many of … END_OF_DOCUMENT_TOKEN_TO_BE_REPLACED