Sako, the dog that fought off coyotes to save a teenager’s life, has been honored by being added in the Purina Animal Hall of Fame.

It was a fishing and wild potato picking trip like any other they had been to. Philips-Garcia, 16, his friend, aunt, cousin and dog, Sako, all went on the day trip in June 2014, but not all of them would return.

Their car veered off the road and went down the steep hill into the forest covering more than 100 yards from the road. Only Sako and Philips-Garcia survived the crash. They were thrown out of the vehicle. Philips-Garcia blacked out and when he woke up, he could barely move.

“I felt behind my head and looked at my hand,” remembers Philips-Garcia. “My hand was covered with blood.” Looking down at his leg, he also noticed a bone sticking out of it. He would later be diagnosed with a broken femur and collar bone. He could barely move to save his own life. 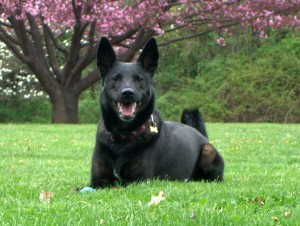 Sako, a king shepherd, had lived with the family since he was a puppy. He didn’t leave the boys side for a moment. He kept close to him and kept him warm through the cold night in the open by cuddling with him. “Maintaining a stable body temperature is vital for the survival of people who’ve been injured and may be in shock,” says Kris Clark, a constable with the Lake Country Royal Canadian Mounted Police. “The dog’s actions may have saved the boy’s life.”

However, the dog’s heroic deeds did not end there. Sako also helped the injured teen drag himself through the forest to a nearby creek where he could get some water. The dog then fought off coyotes that would have attacked young Philips-Garcia.

“We heard the howling as we were just falling asleep,” recalls the teen. “As they came closer and closer, Sako went in. I could hear them fighting behind the rustling bushes. There was a lot of rumbling around.”

Sako never left the boy’s side until they were found by a search team more than 40 hours after the accident.

Into the Hall of Fame

The Nestle Purina Petcare sponsored event in Toronto saw Sako inducted into the hall of fame alongside three other dogs. The event is designed to honor animals whose brave actions have resulted in saving human lives. 140 dogs, a horse and 27 cats have so far been honored.

For experienced dentist Dr. Jarrod Cornehl, the opportunity to give back is one … END_OF_DOCUMENT_TOKEN_TO_BE_REPLACED

One in every 600 children in Guatemala is born with a cleft palate. Many of … END_OF_DOCUMENT_TOKEN_TO_BE_REPLACED