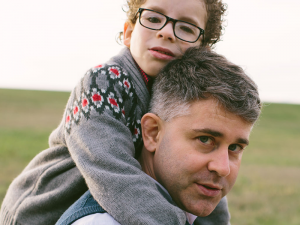 “Early detection helps to avoid the need for severe treatment and even saves life,” says German Children’s Eye Cancer Foundation’s board of trustees head, Monika Koenig. She is talking about the CRADLE app developed by Bryan Shaw and his colleagues to help detect Leukocoria, a rare form of eye cancer.

Bryan and Elizabeth Shaw were like any other excited first time parents. They wanted to document special moments and capture their child’s journey. They would take photos of their baby boy, Noah, every opportunity they’d get. They hadn’t known that these photos would save their son’s life and be the inspiration to save the lives of many other children.

When using a flash in photography, it is normal to spot red light being reflected off the eyes. However, Elizabeth noticed that a white light was reflected off her son’s eyes instead. When she mentioned this to her husband, Bryan, he brushed it off as the effect of the flash. However, her son’s pediatrician took it seriously when he saw the same white light reflected after shining a penlight in Noah’s eyes. Noah was later diagnosed with leukocoria and had tumors in both eyes.

The news was devastating to the new parents. The three-month old endured 30 radiation cycles and three months of chemotherapy. “He ultimately had to have his right eye removed surgically,” recalls Bryan. “The tumor was too big. It covered his field of vision. It was a choice between saving his eye and risking him developing bone cancer from continued radiation. Or removing the eye and giving him a chance at a normal life.”

The birth of a lifesaving idea

Bryan began to wonder about the white light in the pictures and how long it had been showing. Going through the pictures his wife had taken of Noah, he discovered that the light had been present since their son was only 12 days old and increased in frequency as he got older.

Bryan enlisted the help of his colleagues from the Computer Science Department at Baylor University where he is a chemistry professor to help him develop an app to detect leukocoria. They developed an app known as Computer Assisted Detector of Leukocoria (CRADLE).

The app works by detecting white eye in photos stored on your device. Parents can also use it to scan their child’s eye like an ophthalmoscope. You only need to wave it in front of your child’s eyes. A red box appears if reflection is detected.

The app’s enormous potential to save lives has been noted and garnered increased interest amongst medical specialists around the world who are exploring the option of adding it as a tool for diagnosis in pediatric practices.

For experienced dentist Dr. Jarrod Cornehl, the opportunity to give back is one … END_OF_DOCUMENT_TOKEN_TO_BE_REPLACED

One in every 600 children in Guatemala is born with a cleft palate. Many of … END_OF_DOCUMENT_TOKEN_TO_BE_REPLACED