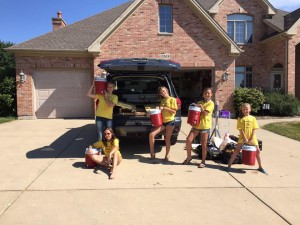 A dollar cup of lemonade can go a long way to quench thirst; and not just physical thirst. In the hands of the Lemonade Brigade, it has helped Blessing, a little Nigerian girl, pay for a crucial surgery that enabled her to walk for the first time. It has also helped Chase, a boy in Illinois living with cancer; take the trip that he’s always dreamed of taking.

It all started with three girls in August of 2014. Aubrey Hennig, Kailyn Fanning and Sammi Parish were a group of 12 year old friends living in McHenry, Illinois. ‘It was the last week of summer and we were looking for a worthwhile project to keep us occupied,’ Aubrey recalls. They came up with the idea of selling lemonade from a stand and giving a percentage of their proceeds to a child in need.

They found the child in need on Facebook. Rowan was a three year old suffering from Leukemia and distantly related to Aubrey. They raised $800 over the next six days. “We couldn’t decide on what percentage to donate,” says Aubrey. “So we decided to just send him all of it.”

The girls thought that would be the end of their fundraising efforts, until a shooting in October 2014, rocked their community. Two deputies in the community were shot and injured by a father of one of Aubrey’s classmates. The girls felt bad for the deputies’ families as well as the family of the shooter. Aubrey and her friends raised a total of $5,000 for the affected families over a span of four days from six lemonade stands.

It was then that the girls realized the impact that their lemonade stands could make. “We formed the Lemonade Brigade,” says Aubrey. They made yellow t-shirts with a trademark and a banner for their stands. They even managed to increase their numbers.

A year down the line and the Lemonade Brigade is growing even stronger. It has become a staple feature at events in the community and has even inspired a group of younger children to form a Junior Brigade. “We mentor the Junior Brigade so that they can take over when we are too old to do this,” says Parrish, 13.

The group has gone international. They held a Worldwide Lemonade Stand that saw 11 children raise funds in different communities. There were also two children in other countries, Uganda and Canada, who joined them.

For experienced dentist Dr. Jarrod Cornehl, the opportunity to give back is one … END_OF_DOCUMENT_TOKEN_TO_BE_REPLACED

One in every 600 children in Guatemala is born with a cleft palate. Many of … END_OF_DOCUMENT_TOKEN_TO_BE_REPLACED