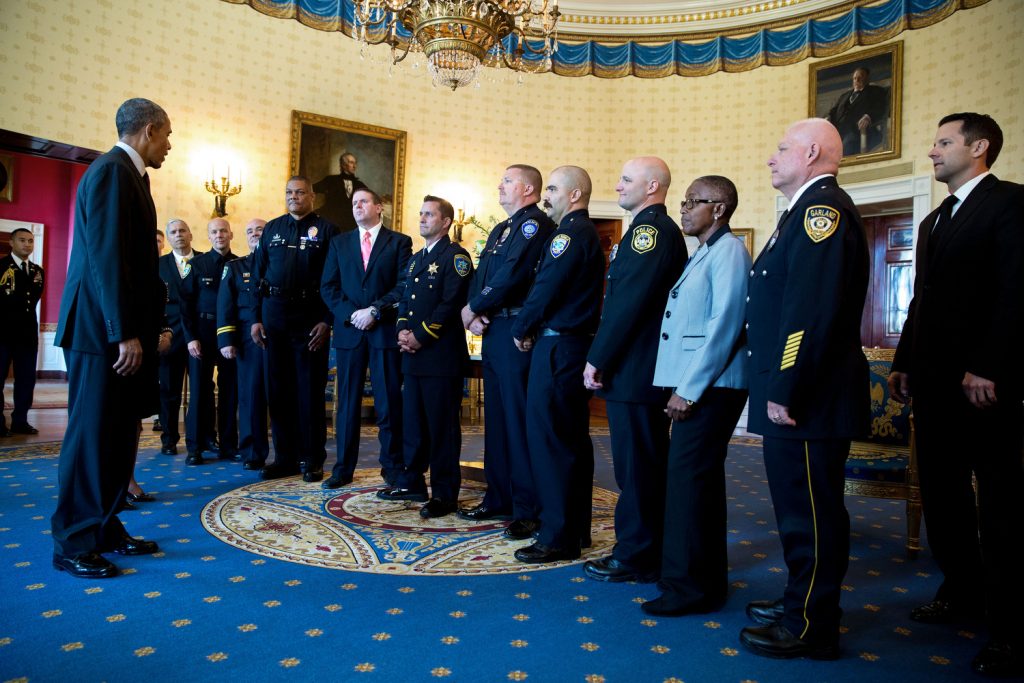 President Obama awarded Public Safety Medals of Valor to 13 law enforcement officers on Monday, May 16th. The officers were recognized for their acts of bravery that helped save the lives of many. “To a person, each of these honorees acted without regard to their own safety,” said Obama during the ceremony.

We would like to recognize these men for their determination, courage, and because they placed the safety of others above their concern of safety for themselves.

Sargent Robert Wilson, who confronted two armed robbers in a video game store last year while buying a gift for his son. Wilson moved away from the other staff and patrons in the store to avoid catching them in the crossfire. Wilson was tragically killed in the resulting shootout, his grandmother, Constance Wilson, accepted the Medal of Valor on his behalf.

Officer Coral Walker, who subdued a shooter who had injured two people, and killed two others.

Officer Louis Cioci, who apprehended a man who shot and killed his partner at Wilson Memorial Hospital, preventing the deaths of many others inside the hospital.

Officer Niel Johnson, who subdued a rampaging shooter that had opened fire on another officer and two other civilians. Johnson confronted the shooter after responding to the sound to multiple gunshots. Johnson exchanged fire before neutralizing the shooter who wielded a high powered assault rifle.

Mario Gutierrez, who was stabbed multiple times by an assailant who had attempted to blow up the fuel tanks of a gas station. Gutierrez apprehended the assailant, saving many people from an explosion.

Deputy Joe Tortorella, who apprehended a shooter after responding to a 911 hang-up call. The shooter had just shot and killed both of his parents before Tortorella arrived. Tortorella then exchanged fire with the shooter and radioed to lock down the nearby elementary school, Tortorella was then struck on his ballistic vest before he apprehended the shooter.

Special Agent Tyler Call, who rescued a woman from her ex-husband who had been holding her at gunpoint.

Officer Jason Salas, Officer Robert Sparks, and Captain Raymond Bottenfield, subdued a shooter that had killed five people inside of a community college.

Officer Gregory Stevens, who stopped two heavily armed terrorists at a shooting outside of an art center.

Officer Donald Thompson, who crossed two freeway dividers and sustained first and second degree burns to pull a 200 pound man out of a burning car.

To these men why give our wholehearted thanks and respect for making the world a safer place.

For experienced dentist Dr. Jarrod Cornehl, the opportunity to give back is one … END_OF_DOCUMENT_TOKEN_TO_BE_REPLACED

One in every 600 children in Guatemala is born with a cleft palate. Many of … END_OF_DOCUMENT_TOKEN_TO_BE_REPLACED